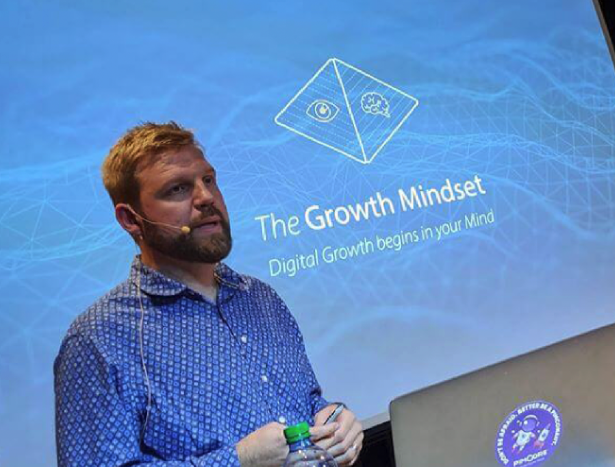 Since a very young age, Sandro Jenny has described himself as a “creative person”. Not only for constantly having different ideas and successful projects but also for implementing them and creating the spaces for others to find support. By the age of 10, he developed his first games and solutions with a kind of “no-code tool”. Now, many years later, he has published the third edition of his book Growth Hacking to help others grow their businesses and develop new ideas.

The latest platform he built and his most recent project is Foundify. A platform that was developed during the first cohort of the HuggyStudio Academy, which took place in 2021. With Foundify, Sandro wants to support creative people find and develop new ideas, on a site where successful cases will be showcased, and users will have the opportunity to connect with like-minded people. “I build something I wish I had when I started to develop my own ideas”, says Sandro, while remembering all his learnings and failures as an entrepreneur.

As of June 2022, Foundify has started to onboard the first users in Switzerland and all over the world. It will be a multi-sided platform for creators and founders where they can, on one side, have a dashboard to help users unlock their creative ideas and experiment and, on the other side, allow users to search for inspiring ideas and success stories. It’s not only for people who would like to found a company, start an agency or build a startup… but for people who have ideas!

Around 2015, Sandro Jenny changed and grew into his professional career. From studying Media Design to acquiring more skills inside digital businesses, for example, at the Swiss marketplace company Scout24. “I started as a project manager in the classical business area, and then I took it step by step to develop more and continue growing my digital skills”, remembers Sandro.

Currently, he is working as a growth manager at an agency in Lucerne, Switzerland, where he continues developing digital solutions for customers. In his opinion, the whole no-code movement and tools like Bubble.io contribute to bringing to life creative ideas.

Foundify is one of them. During the HuggyStudio Academy Sandro tested his critical assumptions about users' willingness and interest to publish, share, and exchange creative ideas. And he confirmed it. Now there is a minimum valuable product with a platform that will start being tested with the first 500 users.

‍“The objective now is to test out what we built, to get feedback from the users, and to optimize the platform step by step. We know that our ideas might not always be the solution to what the users are searching for, so we will go and test it” says Sandro.

“Foundify has a database of interested people: growth hacks supporters, success storytellers, book writers, and diverse podcasts creators. Users can publish their own ideas from blog posts or magazines to their own books, webinars, and courses. It’s not only for people who would like to found a company. It’s for everyone with an idea”.

If you are launching a new product idea or searching for inspiration to create a new business. If you are publishing your first book or releasing your new podcast: Foundify is the platform where you can make all of that happen.

For Sandro, everything started around 2021. Nowadays, he is also collaborating with Michael Oberson, who, besides being a close friend, also did the HuggyStudio Academy and is part of the Foundify’s team.

“We have a lot of different platforms already on the web, and where we can connect users with each other and their ideas. However, what I missed the whole time is having only one platform which can focus on these success stories. What I really searched for is a cool community —not necessarily with thousands of people—, but a community with like-minded ones. With users who will find something new, who have this mindset. That is what I searched for and the reason behind building Foundify”.

The team has already tested out this community concept on a Slack channel, via Teams (from Microsoft), and other tools, and they realized the interest from users. “But I think when you have more content —alongside live meetings and chats—, that will make the experience more creative, more hands-on for people to create their products”, explains Sandro, as one of the reasons why Foundify aims to have everything in one place.

Foundify’s vision is to help people achieve their dreams, and he emphasizes the fact that it can look different for many people. Foundify is not only for people who would like to build a business but also for everybody who has an idea. He shares the example of his musician friend. “I have a friend that is making hip-hop and his dream has always been to have his own album. He has it right now, but the process/way to get there was not an easy one. If he had Foundify some years ago, he would have had the opportunity to find a group of other musicians who could have given him advice on how to make his dream come true”.

‍The value of no-code and joining a no-code academy

For Sandro, there are some aspects to consider as an entrepreneur / creative person, when starting to work on your business/idea/project with no-code tools like Bubble.io.

“Even though is not the fastest platform to learn, Bubble offers you a lot of possibilities and you can develop a very professional site, like a marketplace, which won’t have performance issues. Also, when you go through the user experience it feels like a real product, not a prototype or something like that”.

‍Foundify in the coming months

From his personal need to have a place to find inspiration and new ideas to experiment with, Sandro hopes to support many others with Foundify, that are in the same position was many years ago. His main goal in the coming months is to have many users benefit from the platform.

‍“I hope we have a lot of ideas and users on the platform. I developed exactly what I searched for me some years ago, and I keep hearing users having the same issue: they are looking for solutions to develop their ideas. Solutions with functionalities to experiment with”, confesses Sandro.

In the upcoming months, different content will be developed on Foundify and users will be able to share and upload their experiences. “We have a lot of ideas in the backlog. One I like a lot is helping with a tool to support users in finding good names for a company. It will be great when we have this tool ready for the community” concludes Sandro, who is very excited about what is to come with Foundify.

More about Sandro Jenny and Foundify:

If you also want to submit your idea and support other creative people, you can contact the founder of Foundify, Sandro Jenny, via email at sandro@sandrojenny.com

And stay tuned on his social media channels Twitter and LinkedIn. to know more about the onboarding sessions.

Want to read other stories from the bootcamp’s participants?  Check out: Learning about no-code to build a community of neighbours

If you are interested in joining the HuggyStudio Academy, check out here what the program is all about: https://www.huggystudio.com/