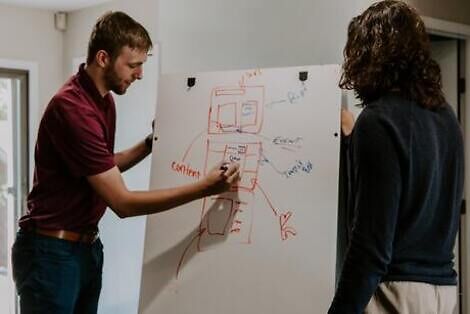 How to test business ideas

Entrepreneurs turn big ideas into reality. Alex Osterwalder, founder of Strategyzer, wonders why that is and how entrepreneurs could do it a bit faster and with better results. In other words, Alex thinks about entrepreneurship strategy. He has thought about it for so long, in fact, that he created a program specifically designed to streamline and clarify the business design cycle.

With his extensive experience, Alex is an expert on what makes startups work, and on the reasons behind why so many startups fail. One of the biggest failures, Alex believes, is a lack of proper testing.

This article was inspired by the opening keynote speech from Alex at the first no-code Minimum Viable Conference in Switzerland, organized by HuggyStudio in March 2021. He shares how systematically testing business ideas can dramatically reduce the risk and increase the likelihood of success for any new venture or business project.

Good entrepreneurs conceive of a business design – a product, an idea, a new process – and then test it. This whole cycle involves multiple steps that are repeated over and over again, until the entrepreneur has a product that meets a market need and is ready to scale.

Those steps fall into two parts.

The initial stage of the process is the business design. In this stage, companies ideate, draw up a business prototype, and assess what they have.

Then they move to the testing stage. This stage is also known as the value proposition stage. In the testing state, innovators hypothesize about the state of the market, experiment with different products, and then learn from the info they've gathered.

There are two keys to success in this process.

First, repeat the process multiple times. Don't skip the testing phase altogether – you won't have any real idea of what might work. Keen entrepreneurs are consistently conjuring up new ideas, and then immediately start the process of testing those ideas to see if they are valuable.

But the second point is nearly the opposite: don't get stuck in the testing loop. As Alex relates, too many companies get stuck in an endless loop of ideation and testing, without ever moving on. After all, what's the goal? To build a business.

Business design leads to testing, which is necessary to scale and to build a business.

Too much money can be a bad thing for startups, because it lets them bypass most of the testing. But when you bypass testing, you skip the part of the process that lets you know whether your product actually adds value. If you start scaling before you add value, you can end of with a product and no customers. Your idea failed, not because it was a bad idea – just an untested one.

6 out of every 10 ventures lose money. A few do ok, and about 4 out of 1000 hit it big. What's the takeaway? Failure is expected - but failures give experience.

Good entrepreneurs maximize the testing process. They test ideas mentally all the time, talking to potential customers and getting rid of stupid ideas as fast as they can. Testing isn't about eliminating risk – again, test too much, and businesses can get stuck. Testing IS about minimizing risk and increasing the odds of finding a good business idea quickly.

Alex Osterwalder co-authored a book with over 40 different ways of testing a business idea. In other words, testing isn't just interviewing people and building stuff. Those are the easy bits. Entrepreneurs who love to talk love giving interviews, while software engineers love building stuff. But those are two very limited ways of testing a concept, and they can easily give the wrong information.

Instead, use different methods of testing – methods like the Speed Boat. By asking participants to weigh the pains and gains of your idea, you'll get a far better idea of how important different aspects of the process are. This gives entrepreneurs context for the answer people give, something a freewheeling interview can't give.

In fact, multiple testing methods can be used together to form a discovery chain. These chains start with easy tests first; tests like visiting or creating a discussion forum and then conducting interviews. Then the other tests refine the information you've gathered and become a bit harder/more expensive to do.

Cheapest and fastest experiments first, creating stronger and stronger evidence. Then, at the end, you build.

Score Your Evidence - And Your Idea

Is your idea doable? Can you build it? Can you adapt or change it?