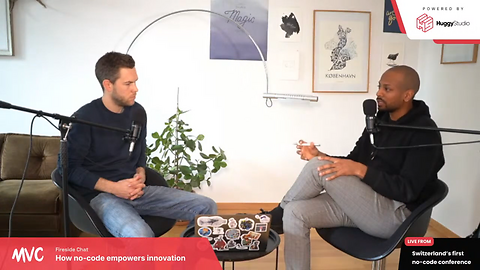 Innovation teams get their products faster in the market, individual entrepreneurs reduce costs, and UX designers are able to improve their prototyping skills in record time: all of that, without writing a single line of code!

HuggyStudio co-founders Daniel Abebe and Fabian Gmür shared their experiences with no-code platforms at the first no-code Minimum Viable Conference in Switzerland, while highlighting how the movement has slightly changed the way business ideas are being tested.

Remember that no-code is all about visual programming and creating functionality designs without writing code. You are also able to have workflow layers so you can add data if needed, and at the end create software that is comparable to one with code.

The first experience with no-code

The need and desire of building their own products was the drive for Fabian and Daniel to enter in the no-code world, while discovering its infinite potential.

Fabian has a background in business but he was always interested in the creative side of designing websites, so he started early on with that. Wordpress, for example, as well as other tools, were his first steps. However, he realized that he was missing the data layer and the workflows. With time he not only used the no-code platforms for business purposes, but he also went on validating business ideas during his spare time.

No-code allows teams to build complex applications, prototype faster and get immediate feedback. However, Daniel thinks that before jumping with no-code, you normally go through the three layers of what your main needs are:

Fabian’s previous team at Scout24 created and validated new business ideas like marketplaces. As always, financial and personnel resources were quite limited, especially development resources. With no-code, he realized the potential of building on already existing platforms, where you could use pre-built elements and work faster with less resources. For example, things like payment and login processes were already there and didn’t have to be built from scratch.

At the beginning, his product incubation team at Scout24 built smaller tools, organized simple gatherings or participated at hackathons – because some employees were still skeptical – to showcase what could be actually done with no-code. With time, their biggest project was building and setting up a whole new two-sided marketplace: a new platform for car subscriptions! You pay a monthly fee to use a car and everything is included besides gas. The idea connects car subscription providers with users; and no-code worked perfectly and led to the first transactions and happy customers.

You need fewer resources and you are faster. Using no-code lowers the barrier of many opportunities for your project. In Fabian’s words: “the car subscription marketplace wouldn’t have been there, without the no-code movement. We wouldn't have had enough investment to be able to do the next step after the initial smoke-testing”.

Ensemble19 in Switzerland and scaling with no-code

By now we all know that with the COVID19 pandemic many businesses were affected. And yes, also many alternatives arose to support entrepreneurs and owners in different areas and communities. Maybe you have already heard about Ensemble19, the non-profit site initiated by HuggyStudio.

The platform scaled to over 1'000 businesses and $600'000 collected using Bubble. Despite its success, Ensemble19 never had to switch to traditional development.

Watch the video and hear the complete story of how through vouchers and donations over a half a million dollars were raised within eight weeks.

“People think that when you scale your business you have to change platforms and build it from scratch somewhere else, but you can already do a lot of things on no-code platforms”, Daniel Abebe

No-code applications, websites and platforms are easier to maintain than the traditional development ones.

No-code tools help you to be and learn faster.

The learning process, however, will be your own, a unique one. Just be patient, and keep testing! It’s important to learn and to be hands-on, so you will have a full comprehension of what each platform does and how your application works.