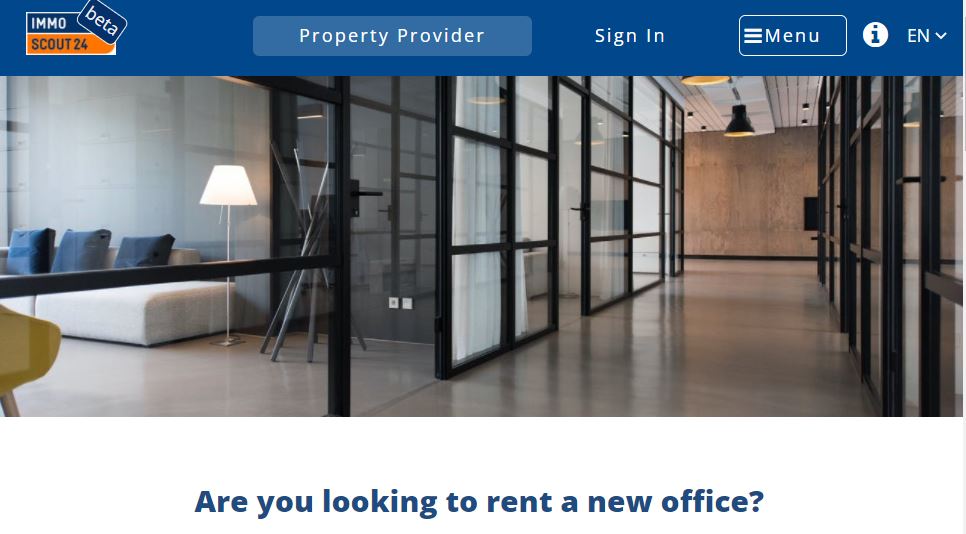 Building a marketplace with no-code

Romain Courthion’s working experience was never involved with the so-called “technical side of things”. He has a background in business and finance and his career has been mostly in the digital space, until he stumbled with the idea of no-code and the thought of building a new marketplace from scratch. That’s how the pilot website of the Commercial Real Estate of Immoscout became a reality.

Even though Romain currently works as a sales & operations manager for ImmoScout24 —one of the most famous real estate marketplace in Switzerland— he joined the online No-Code Academy from HuggyStudio to build, develop and launch a new platform that facilitates the search and match of commercial spaces —for entrepreneurs, CEO’s or facility managers— looking for offices, storage facilities, co-working spaces, shops, among others.

The pilot was built with Bubble.io, a powerful and well-known no-code tool, and within just a few weeks, more than 400 users have visited the online platform, over 100 people have registered and around 50 requests were submitted already. All of this was achieved with minimum traffic acquisition investments.

The first experience with no-code

“As I am more focused on the finance and performance side of the digital business, I was always thinking that I was missing the understanding of the real building process and the product aspect of things”, says Romain, who heard about the no-code movement for the first time during a workshop in the company Scout24, led by Fabian Gmür and Stefan Egger —former employees at the company—.

Romain was ready to join the no-code bootcamp, and had already interviewed a few key clients to understand what needs such a platform should solve. Not only did he want to build and launch his own application for the first time, but he also wanted to further develop himself and his technical skills.

In his opinion, one of the most useful aspects inside the No-Code Academy from HuggyStudio was having the capacity to react quickly on customer feedback and being able to iterate super fast to make things as efficient as possible. “What I did in order to increase the chances of success on the supply side and speed the supplier's onboard was to create a simple way to onboard them myself”. Currently, the suppliers interested in joining the Commercial Real Estate of Immoscout don't need to go on to the platform and register themselves to have a live account. As soon as Romain gets confirmation that they are interested in the concept of the platform, he will help registering them by himself and they will get one confirmation email to change their passwords. After that, all is set up and ready for them to start receiving requests.
‍

“If the customer says he is too busy to register and he doesn’t want to do it, what am I doing? I provide them with a practical solution, and I am able to change it directly on the platform. Within a few hours it is live and already implemented. That’s the essence of no-code. Also the customers see the value of it because they give feedback and I can react to it immediately”.

Romain’s platform is designed to facilitate the search and match of commercial spaces —for entrepreneurs, CEO’s or general business people— with users looking for offices, factories, storage facilities, co-working areas, shops, etc. The concept focuses primarily on the demand side. ‍

“We realized that as a business owner you have a lot of things to do, you are busy and don’t have a lot of time to invest to search for the perfect office for your team. Besides, what is available in the market are some very generic properties displayed in various platforms but you need to invest hours and substantial effort to go through those platforms and find what matches your criteria”, explained Romain, as part of the reasons why he built his own platform with Bubble.io.

The platform is very simple and it takes max. 30 seconds for a user to submit a commercial space request. After that, several real estate agencies that have commercial spaces available will contact the interested person directly through the platform and make a tailor-made offer based on their demand criteria.

Location, type of property, budget and size: are the basic criteria they are asking property seekers to submit; and that's enough to generate multiple matches with suppliers.

Romain Courthion was part of the first batch of students who joined the No-Code Academy from HuggyStudio, from June until August 2021. After the academy, where he learned how to use Bubble.io —one of the most used platforms in the no-code world— he continued testing and developing his prototype and presented it to an internal board of the company.

Romain explained that “on the supply side I was working very closely with our key account manager (at ImmoScout24) who is dealing with our biggest clients, allowing them to test the prototype and being able to provide direct feedback”. On the demand side, however, he created a traffic generator plan —based on a multi-channel approach: user newsletter, on-site placements and LinkedIn— in order to capitalize on the existing strong traffic landing on the core ImmoScout24 platform.

Romain has learned to do many things in Bubble by himself: from adding plug-ins to the website to see and monitor user behaviors, managing issues with the registration process —e.g. people clicking on the wrong button and producing the wrong behavior—, to finding solutions in order to reduce the users drop rate.

Scaling in the upcoming years

Although the platform has only been live for a few months, Romain Courthion has plans to scale a bit faster. Currently, the site is restricted to a small group of users in order for him to control the whole ecosystem and be able to fix things by himself; nevertheless he realized that there is indeed a true demand for such a platform.

Until now, the app of Commercial Real Estate has shown some promising results that, in the eyes of a business owner, it can be possible to save a lot of time and money in the searching process of the right commercial spaces.

“What I developed by myself, without being a developer, would have required at least one UX designer, one backend developer and one frontend developer so, three resources at least for a few months. All of that, while working on a concept with a high level of uncertainty. By leveraging Bubble.io and as a one-man-show, I could do and test many things without the need to invest a lot of money or resources in the main concept. For me, that’s the beauty of no-code!”.

Personal and professional growth with no-code

Romain did not only create his first own platform, but also develop his tech skills as an individual using no-code tools. His desire to learn and do something different inspired him to continue showcasing and testing ideas quicker in a very agile way.‍

“When you have such a conceptual job, being able to build something, so to say ‘with your own hands’ and see real people using it while having a need for that is pretty incredible”, confessed Romain about his learning path.

In his own words, Bubble and the whole no-code concept open to him a completely new world “about democratizing the creative processes: building a platform without being bored of writing code!”.

On the corporate and innovation side of things —in the world of intrapreneurs— and for teams interested in working with no-code tools, Romain highlighted that the speed in developing new concepts and innovating inside a company is for him one of the key learnings and important aspects of the whole process.

And did Roman have any advice for entrepreneurs who want to get into Bubble.io and no-code in general? Watch the video and listen to what he said.
‍

”When working and learning more about no-code and Bubble you are getting out of your classic job profile or segment —the one you are potentially stuck in— and the space for creativity is given and you can show it. Use the opportunity! ...even if you are not searching to change jobs you will have the space to learn different skills as well”.

If you are interested in using the platform or have any other comments, you can contact the creator, Romain Courthion, via email at romain.courthion@immoscout24.ch.

Want to read other stories from the bootcamp’s participants?

Check out: Learning about no-code to build a community of neighbors